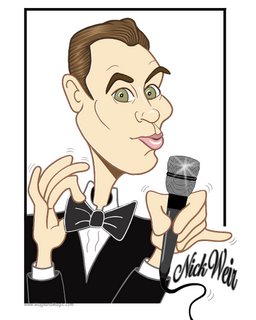 Scott and I went on a Carribean Cruise, last March, and we had a wonderful, talented cruise director, named Nick Weir, (he’s from Australia). Of course, I drew caricature aboard the cruise line. Anyway, Nick ran from my camera, as I tried to take a photo of him, so I could draw his cartoon. He claimed he did NOT want a caricature, that he hates those things! He was very comical on the way he ran from my camera, too.
At a later time, I was asked to draw the captain, from a photo, and lo-and-behold…there was Nick in the photo, with the captain.
So…me being sneaky as I am,drew a Cartoon for Nick and sent it to his cabin. Later, he called my cabin and said, “He was VERY Surprised by it and absolutely LOVED it! He said he always witnessed caricatures being ugly…yadayadayada…and was afraid to ever get his done!
A few weeks later, when I returned home, he emailed me and asked if I could draw the “same cartoon I did of him,” into one of my digital designs. Well….Here it is!!!!
Nick was overjoyed with my finishing touch and wants to use it for his website,
tinyurl.com/g74bd
I cerainly don’t mind that he uses this for business, cuz I really like this guy (he’s tall and handsome, but…I’m married ‘snaps fingers’ Dang it!)BUT he will sell my cartoon work for sure!!! (Like I need the work! Doh! What I do?)LOL!!!!