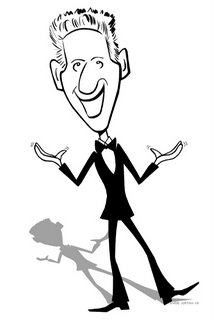 I shared the high school play called “South Pacific” with this guy, Tony, to later find out he became quite a well know magician in California! He changed his name (name used to be Jack) and I stumbled across him in one of Scott’s magic magazines and said “I know this guy, but Tony is not his name!” Since Scott knew him, he called him up to ask if he ever did a play, lived in the Coal region of PA, yadayadayada…. and Tony was quite surprised to hear that I was Scott’s significant other (he shared magic conventions with Scott beforehand). It’s a small world!
Anyway, I promised to do a cartoon for him (Tony) and never found the time, until now…I MADE the time!